Whist is a classic English trick-taking card game which was widely played in the 18th and 19th centuries. Although the rules are extremely simple, there is enormous scope for scientific play. A standard 52-card pack is used. The cards in each suit rank from highest to lowest: A K Q J 10 9 8 7 6 5 4 3 2.

Whist is a partnership trick-taking game where players strive to win the most tricks possible. It is played with a standard 52-card deck where Ace is high. Trump is chosen randomly to be the suit of the last card dealt.

The team that takes the most tricks each hand is awarded one point for each trick over six. For instance, if a team takes 8 tricks, they score 2 points (8 – 6 = 2).

Classic Whist can be played with an optional honours bonus (see Options, below). If enabled, the team holding 3 of the 4 trump honours (Jack, Queen, King, or Ace) is awarded an extra 2 points. If holding all 4 trump honours, they are awarded 4 points. Note that this bonus is earned based on cards dealt, not cards captured.

Bid Whist is a partnership game where players bid to determine trump, specify the number of tricks they expect the partnership to take, and whether high cards or low cards win the trick (“uptown” or “downtown”).

The team winning the bid and making their bid earns one point for each trick over six. Failure to capture the number of tricks indicated by the bid results in the bid level being subtracted from their score. 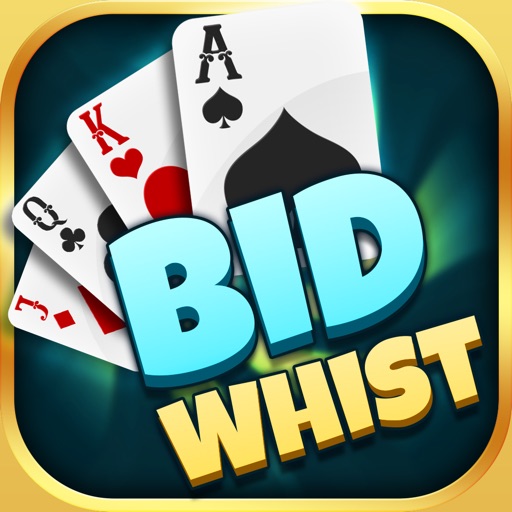 Bid Whist is commonly played with a 54-card deck: the standard 52-card deck plus two Jokers, one red and one black with the red Joker being the highest rank.

Trickster Whist offers a game option to set the number of jokers to 0, 1 or 2 (see Options, below).

Twelve cards are dealt to each player. The remaining cards are left undealt and comprise the kitty. These are counted as the first trick taken by the team that wins the bid.

Depending on the number of jokers, the kitty will be 4, 5, or 6 cards.

Following the deal, starting with the player left of the dealer, each player has one opportunity to bid. Initial bids consist of a level and an indication of how the hand will be played. These indications are “NT” for a no trump hand or a down-pointing or up-pointing arrow.

The “level” of the bid means the bidder must take 6 + level number of tricks to win the hand. For example, a level 3 bid means that 9 or more tricks must be taken to win the hand (6 + 3 = 9). Note that one trick is awarded “free” for winning the bid, representing the kitty.

If, during the initial round of bidding, the first three players pass, the dealer must bid.

After the bid is set, the player left of the dealer leads the first trick.

However, if the bid is no-trump, the jokers have no value and cannot win a suit in which they are played. If a player leads a joker, the suit of the trick is determined by the first non-joker played in that trick. These two rules means that the jokers are worthless in a no-trump contract.

The team that did not win the bid scores nothing.

“Now” creates a new game that starts immediately. Other options schedule a game for a time in the next 24 hours. Compete and Join games only.

“Bid Whist” incorporates bidding to determine trump and the rank of cards. “Classic Whist” is always Ace-high with trump determined by the last card dealt.

“Yes” awards a bonus when holding 3 or 4 honours. “No” disables this bonus. Classic Whist only. 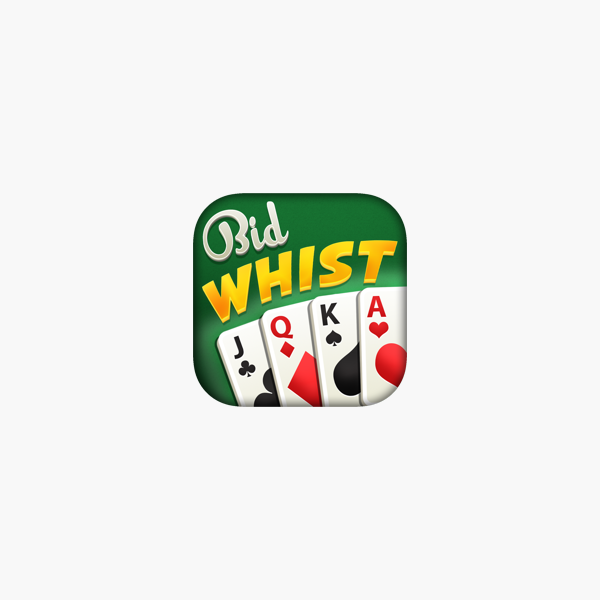 “Yes” means a low (downtown) bid beats a high (uptown) bid of the same level. “No” means low and high bids of the same level are considered equal and to bid higher, either NT or the next level must be chosen. Bid Whist only.

“Yes” adds the cards from the kitty to the high bidder’s hand. He or she then discards an equal number of cards. “No” keeps the cards in the kitty out-of-play. Bid Whist only.

“Yes” scores an NT bid at twice the normal value for its level. “No” scores NT bids normally. Bid Whist only.

“Yes” gives the defending team points for tricks they take over 6. “No” only allows the bidding team to earn points. Bid Whist only.

“Yes” hides this game from other players until they’ve been explicitly invited using the “Invite Friends” form. “No” allows all friends of players in this game to see it. Join games only.

“Yes” to allow players to see bid and card play suggestions, depending on their personal setting. “No” prevents all players from seeing suggestions. Always “Yes” in Play games; “No” in Compete games.

“Yes” allows up to 10 additional players to watch the game. They do not see anyone’s cards. “No” prevents anyone from watching. Join games only.

“None” disables all chat during the game. “Preset” allows only the built-in chat messages to be used. “Text” allows full chat. Full chat is also always available before and after games.

Among the many apparition of whist card game in literature, one cannot mention the Leo Tolstoy's masterpiece War and Peace, or Jules Verne's novel Around the World in Eighty Days, whose main character Phileas Fogg plays whist card game. Here follows the description of whist given by Edgar Allan Poe in his novel The Murders in the Rue Morgue (1841):

Whist has long been known for its influence upon what is termed the calculating power; and men of the highest order of intellect have been known to take an apparently unaccountable delight in it, while eschewing chess as frivolous.
Beyond doubt there is nothing of a similar nature so greatly tasking the faculty of analysis. The best chess-player in Christendom may be little more than the best player of chess; but proficiency in whist implies capacity for success in all these more important undertakings where mind struggles with mind.
When I say proficiency, I mean that perfection in the game which includes a comprehension of all the sources whence legitimate advantage may be derived. These are not only manifold, but multiform, and lie frequently among recesses of thought altogether inaccessible to the ordinary understanding.
To observe attentively is to remember distinctly; and, so far, the concentrative chess-player will do very well at whist; while the rules of Hoyle (themselves based upon the mere mechanism of the game) are sufficiently and generally comprehensible.
Thus to have a retentive memory, and proceed by 'the book' are points commonly regarded as the sum total of good playing.
But it is in matters beyond the limits of mere rule that the skill of the analyst is evinced.
He makes, in silence, a host of observations and inferences. So, perhaps, do his companions; and the difference in the extent of the information obtained, lies not so much in the validity of the inference as in the quality of the observation.
The necessary knowledge is that of what to observe. Our player confines himself not at all; nor, because the game is the object, does he reject deductions from things external to the game.
He examines the countenance of his partner, comparing it carefully with that of each of his opponents. He considers the mode of assorting the cards in each hand; often counting trump by trump, and honor by honor, through the glances bestowed by their holders upon each.
He notes every variation of face as the play progresses, gathering a fund of thought from the differences in the expression of certainty, of surprise, of triumph, or chagrin. From the manner of gathering up a trick he judges whether the person taking it can make another in the suit. He recognizes what is played through feint, by the manner with which it is thrown upon the table.
A casual or inadvertent word; the accidental dropping or turning of a card, with the accompanying anxiety or carelessness in regard to its concealment; the counting of the tricks, with the order of their arrangement; embarrassment, hesitation, eagerness, or trepidation—all afford, to his apparently intuitive perception, indications of the true state of affairs.
The first two or three rounds having been played, he is in full possession of the contents of each hand, and thenceforward puts down his cards with as absolute a precision of purpose as if the rest of the party had turned outward the faces of their own.