Spades is a trick-taking card game using a standard 52 card deck. To win, players try to score the most points.

How to get started
Spades is multiplayer! You can play with a total of 2-4 players. To get started, enter a name for yourself (ex: 'player-1') and a room name. The room name can be anything you like (ex: 'Joan's room' 1). If you're playing with others, they can join your game by using the same room name.

Spades is all about bids, blinds and bags. Play Spades for free on Games.com alone or with a friend in this four player trick taking classic.

A typical round
Spades has several multi-turn rounds. Each round, 13 cards are dealt to each player.

At the beginning of the round, starting to the left of the dealer (👑), each player will make a bid on the number of 'tricks' will be won by that player in the round. The bid can range from 0 to 13. To make a bid, click on the number corresponding to what you'd like to bid

Next, starting to the left of the dealer, players will complete a turn by placing one card on the table. Play a card by dragging it to the table, or by double-clicking on it, if you're not on a phone. Players must follow the suit of the first card played. If the player does not have that suit, then the player is free to play any card. The dealer cannot start with a spade until either another player has played a spade, or they have only spades in their hand.

Players will keep taking turns until everyone runs out of cards dealt for the round, and then round restarts.

At the end of each round, scoring will be tallied based on tricks bid vs. tricks won (see 'Scoring'), and the dealer will rotate to the next player.

Bags
Bags accumulate over the course of rounds. When you reach 10 bags, you lose 100 points, and your bags counter resets.

Nil
If you bid 0 (or nil), you gain an 100 point bonus if you successfully win zero tricks. However, if you win any tricks, you will receive a 100 point penalty. 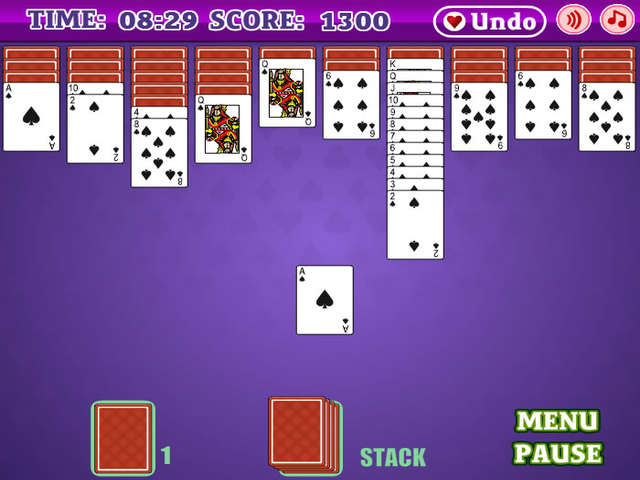 Team play
When playing in teams of two, the first and third players are teamed up versus the second and fourth players. The teams share a score and a bag count. The team’s bid is equal to the sum of bids of each of the players, and the team’s tricks won is also equal to the sum of the tricks won by each of the players. The only exception is if either of the players bid nil. In that case, that player must win 0 tricks by themselves, and the tricks they win do not contribute to the other player’s tricks won (though they still count as bags).

Any more questions? Feel free to contact us at [email protected]

Enjoy Spades online with your family or with opponents worldwide!

Spades is a popular trick-taking card game, similar to Hearts, Bridge, and Euchre. It is played with a traditional, 52-card French Deck. The game is mostly played in the US, UK, and Canada. Read about the complete rules and all available modes of the game.

Play Spades for free in the practice rooms to improve your skills. It is possible to play on any browser and device type!

Find out more about the different game options and custom adjustments. Discover the game introduction and terminology. Stay informed about interesting charts and tips on how to win against your adversaries.

In VIP Spades you have two different opportunities to play for free:

Become the best player and earn your spot at the top of our weekly leaderboards. Play spades in the professional rooms and show your friends that you are a real master of spades card game!

The most popular game mode among the players – Pairs, consists of four players separated in two teams. The game is played with a complete deck of 52 cards (2,3,4,5,6,7,8,9,10,J,Q,K,A), where spades are always the trump suit. A trump card cannot be played unless the player has no other cards besides spades or until a spade has been used to trump another trick.
The cards are dealt clockwise – the players receive thirteen cards each. Every player must declare a bid – number of tricks from 0 to 13, which he expects to win. He can choose to see the cards or declare a blind bid. A successful blind bid yields 200 extra points. The team’s bids are summed up to form the team’s total bid. A NIL bid is also a valid option, where the bidder declares to take 0 tricks. If he succeeds, the team is awarded 100 points – if he fails, however, the team loses 100 points.

In this mode there are no teams, each player has a separate score and plays for himself. The winner receives the whole prize pool. If there are two or more players with the same score, the cards are dealt again for another round. A successful Nil bid gives 50 points and an unsuccessful one -50 Points. A blind bid cannot be placed. The bag penalty of five bags equals -50 points. Playing games with the Solo mode is preferred my many players and the one-man-army style of play is the reason why most tournaments are with the Solo format.

The players play in teams but the difference is that one of the team members must bid Nil while the other has to bid at least 4. There are no Blind Nil Bids.

In WHIZ mode the players must either bid Nil or bid the exact number of spades they possess. Again, no Blind Nil is allowed and the game is played in teams.

In teams each player must announce the exact number of Spades they have. If a player doesn’t have any, he must bid Nil. Again, there are no Blind Nil bids.

You can check out spades rules page for more detailed information.

Read more about the most popular game modes in our blog post.

For beginner spades players, the jargon alone can send you into a tailspin. Not to fear! The language of spades is easy to pick up, and before you know it, the craziest phrases will become second nature. Until then, our handy guide will steer you in the right direction.

Over the years, many variations of spades have sprung up where players have added extra rules or unexpected trump cards to enhance the fun. Few of these variations are available in online play, but they’re crazy enough to be worthy of mention. Here are just some of them… Online casinos that accept interaction.

So whether you’re tempted by playing free spades online.

Do you have a strategy you want to discuss with other passionate players?

– Visit our global chat or take part in the discussions on our social pages.

Check for updates in the VIP Spades Youtube channel where we are producing training videos, highlighting strategy guides and tutorials. For funny situations, news, quizzes and about our official spades tournament rules – visit the official blog!

VIP Spades continues to improve with new content and game features. See the latest news and changes in our channels. You can learn more about VIP Spades brand and company details. If you have any questions or suggestions, contact us.

Latest Posts from our Official Blog

Check back at any time to get the latest news and the winning strategies of a classic game of Spade! We host a variety of topics and posts from long-time spades players and professionals.

How do I start playing?

Click on the room you wish to play in and our matchmaking system will search for more players. The algorithm will match four players, available for a game in the room you have selected. When everyone connects to the game successfully, the bets are taken and the game begins. Leaving a match in progress will result in a penalty.

Chips are the virtual currency in VIP Spades – you can spend them on games, tournaments or to purchase gifts for other players.

How do I send gifts?

Find the user you wish to send a gift to, click on the avatar to see that user’s profile and click “Send Gift”. You will be presented with the list of available gifts and their corresponding prices in chips.

If you have more questions, please check our official FAQ page.

Enjoy other card and board games. Play on any device!