Short-deck poker (also known as six-plus hold'em) is a new variation of traditional Texas hold'em that mostly follows the same rules albeit with a significant difference.

Short-deck poker uses a smaller 36-card deck rather than the full 52-card deck.

Most first heard of short-deck poker after it was introduced among the mix in the high-stakes cash games in Macau.

6+ Short-deck poker is available online on the following websites:

Before we discover how to play short-deck poker, let's see how to get to the 36-card deck needed to play a game of 6+ hold'em.

That leaves the 6xs up through the Kxs as well as the Axs.

What about the Aces?

As in regular hold'em, in short-deck poker the aces still count as high or low when making straights.

The lowest possible straight in a game of short-deck poker is Ax9x8x7x6x (think of the ace as essentially replacing the missing 5x).

Each player receive two hole cards and use them in combination with five community cards to create the best possible hand.

A game of short-deck poker features four streets of betting:

However, there are some differences in the poker short-deck poker that you should know about before playing.

Short-deck poker can be played according to the exact same rules as regular Texas Hold'em.

The betting can be fixed-limit or no-limit (although most often the game is played no-limit), and the same hand rankings can be used as follows:

For more info about the hand rankings in poker and which hand wins, visit our guide to poker hands. 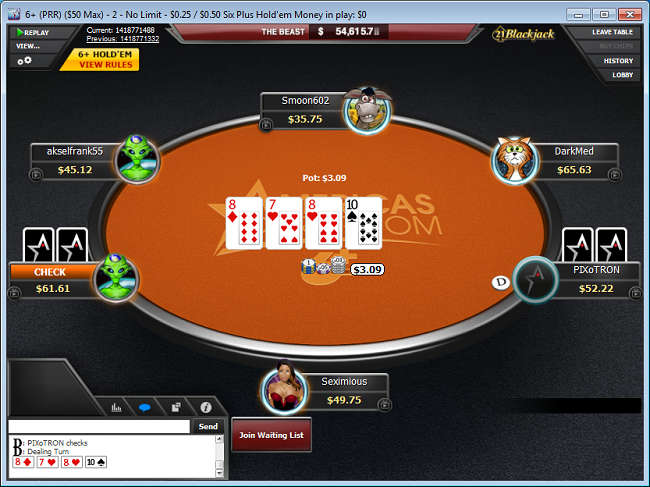 Why a Different Hand Rankings?

These changes were introduced the because the removal of cards from the standard deck alter the probabilities of making certain hands.

For example, with only nine suited cards (instead of 13), a flush is harder to make in shord-deck poker than in regular hold'em.

One other popular variation often introduced in six-plus hold'em has to do with the way the river is dealt.

The game can be played according to the same procedure followed in regular hold'em, with the community cards coming in the same way — flop (three cards), turn (one card), and river (one card) — and betting rounds after each street.

More often, though, instead of a river card being dealt to complete a five-card board, players are each dealt a third hole card instead.

Players then make their five-cardpoker hands by using exactly two of their three hole cards and three of the four community cards.

The building of hands resembles the procedure followed in Omaha poker where players must use two of their four hole cards plus three board cards to make a five-card poker hand.

As you might imagine, the removal of low cards and use of the 36-card deck makes it more likely to make higher value hands, a change that tends to introduce more action.

You should adjust your thinking about relative hand values from what they are used to in regular hold'em.

The smaller deck makes it easier to make two-pair hands, which means a hand like top pair-top kicker is no longer as strong in six-plus hold'em as it is in regular hold'em.

Straights and full houses are also easier to make in six-plus hold'em than in the regular version of the game (a reason for the alternate hand rankings). Free casino apps for android.

The odds of hitting certain draws change, too, in short-deck pokr.

While you're still looking for the same eight outs there are fewer total cards in the deck, thus increasing the percentage you'll make your straight.

The smaller deck also affects the likelihood of being dealt certain hands. [∫]You're more than twice as likely to get pocket aces[/B] in short-deck poker than you are in regular hold'em!

Finally, players being dealt a third hole card instead of there being a fifth community card obviously affects hand values as well, making it even more likely that players improve their hands — yet another factor that has to be taken into account when calculating odds and considering your final-round betting strategy.

The changes from regular hold'em aren't terribly complicated, making it easy to new players to learn and play right away.

How do you play Short-Deck Poker?

A game of short-deck poker follows the same rules and gameplay as Texas hold'em poker.

The players receive two hole cards and they need to combine them with five community cards to create the best possible five-card hand.

All the details to know before playing a game of short-deck poker are in this article.

Why is short-deck poker so popular?

The game of short-deck poker, os six-plus hold'em became famous at the high-stakes games in Macau. Due to the smaller deck, the game makes it more probably for players to hit high-value combinations.

Where is short-deck poker played?

The removal of some low-value cards from the deck changes the game's basic strategy and the value of different poker hands.

To understand ranges and odds in short-deck poker, have a look at this article.

Home to the biggest tournaments online, these rooms also have the largest player base, great bonuses, tons of action and the best software. If you don't have accounts here, you are missing out on the best that online poker has to offer.

Four Of A Kind